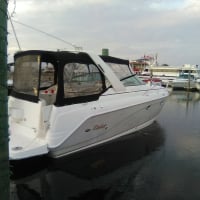 rasbury Sanford, FLMember Posts: 6,728 ✭✭✭✭✭
June 2019 in Trailer & Trailering Discussions
Trailer for my 270 was a turd in a punch bowl to begin with and have tried really hard to get it working correctly....surge brake twin axle. When I bought it four years ago, put a new master cylinder and rebuild kits for the calipers. Just re placed the master cylinder, not sure 100% what went wrong with it but I guess they take a heck of a beating and it wan engaged and stuck. On top of, I think I had a seal bad or the MS getting stuck caused at least one brake to lock, over heated, ruining the hub blah blah blah. So, One new hub, new seal on that caliper and new master cylinder. I bled them thoroughly but they just don't seem to be working well and/or not all wheels. I really need to get the boat off so I can more easily jack it up, pull offending calipers off and see what's going on but my real concern is the lines. I've heard varying option of if these should be all rubber or metal lines with the rubbers ends like a car is done. The issue that really comes to mind is I have no idea what year trailer this is and how old these lines are. I question if these lines get old, will they start to baloon when you hit the breaks taking the pressure away from the brakes? Or likewise, as they age do they get old and constrict and perhaps the right amount of pressure/fluid is not getting to the caliper? There are a couple of spots in the run of the hose where it is coiled like a rope or hose and tied off to the trailer. The lines going across the axle are taped with duct tape like someone kind of through this thing together albeit some time ago. The calipers are all nice and clean, I rebuilt them with new pistons, seals, dust boots and slide pins so I don't think anything would be binding on the brakes them selves and it is a pretty easy system, just hard to measure where the failure is.....would the lines themselves be the next likely thing I should just replace? Can I buy hose and fittings and do this myself?
0 · Share on TwitterShare on Facebook