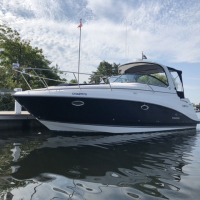 Was there a running change mid-2009 where the portlight configuration changed?

I'm finding several 340s with 2 oval portlights on port side and no hardtop: