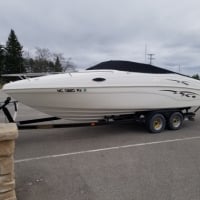 Its the 5.7 Vortec long block.  Having it profesionally done.  Just wondering if anyone has ever done this and did they lose much power on the water ??  I know the MAG 350 MPI is rated at 300 HP.  Just wondering if I can trust the website HP rating for the Vortec ?