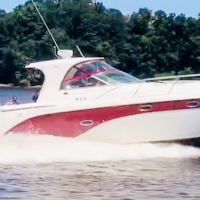 Dirtythirty Delran, NJPosts: 373Member ✭✭✭
August 2019 in General Boating Discussions
Looking for a little help from anyone who may have some experience with diesel engines.  I've had an issue with my port side engine now for a while and it has been nothing more than an annoyance, but it seems to be getting a little worse as time goes on.
My port engine has been spewing black sooty smoke and leaving a black oily film on the water when I engage the joystick and maneuver in joystick mode.   It seems to stop when I am not in joystick mode and it either doesn't happen while I'm under way, or I am unable to notice it.   Along with this issue, I've noticed that at times, while powering up to planing speed, my engine(s) seem to level off at about 2700 rpms and hang there..preventing me from getting up on plane. This could be just one engine (possibly the port) hanging....and then the sychro preventing the starboard engine from going to WOT...Not sure.  I can work through the problem, and eventually plane the boat, but sometimes it takes a few tries and a few minutes. And finally, I noticed that while under way, at about 2800 rpms, my gauges are telling me my starboard engine is running at about 11.5GPH, and my port engine is running at about 13.5 gph.
I have replaced the turbo boost sensor on the port engine, and that has not solved my problem.
Dock chatter is telling me that maybe its an injector issue.
Any thoughts

here is video of the boat in joystick mode: