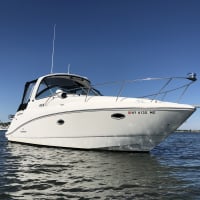 aero3113 Long Island, NYMember Posts: 4,991 ✭✭✭✭✭
November 2019 in General Boating Discussions
The cockpit refrigerator door on my 330 was set to swing open from the left. Does it make more sense to have it open from the right to have easier access from the cockpit area? It seems kinda awkward to keep it like this unless it’s meant to be easy access from the swim platform?
2008 330EC
0 · Share on TwitterShare on Facebook