HELP with changing bearings...with 270FV on the trailer 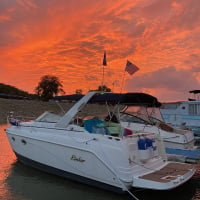 04FV270riverrat Lexington, KYMember Posts: 264 ✭✭✭
December 2019 edited December 2019 in Trailer & Trailering Discussions
So on my way home for winter storage about a half mile from the house, I noticed a trailer tire wobbling. I limped it home at 5 mph. I'm going to have to change the bearings...while the boats on the trailer. The trailer is the dual axle Trailmaster. Any tips for this project?

I feel like when I had a blowout on the road, the jack used was under the boat and I think it bent the axle up some, so I need to jack it on the frame or near the tire.
0 · Share on TwitterShare on Facebook