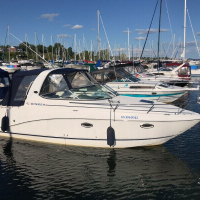 Squatch68 Ottawa Valley, Ontario, CanadaMember Posts: 59 ✭✭
October 2021 in Rinker Express Cruisers Forum
Well folks, I was just finishing up the job replacing the swivel shaft seal using the JR Marine kit (which is fantastic btw) when I discovered something I hoped to never see.  Was cleaning up the area where the steering arm goes through the transom assembly on the inside of the boat. Moved the wiring harness that runs across the top of the transom where it transitions to the bottom of the swim platform. Discovered the thin fibreglass layer was cracked along the entire top edge and the wood soaked and rotten. Chipped off some fibreglass lower down around the transom plate and it's soaked all the way down.

Through more investigation discovered that water has been coming in through retractable cleats on the corners of the swim platform, then running across the swim platform and then down into the bilge.  At some point there must have been a defect or something in the fibreglass which allowed some water in and it's just continued to get worse with time.

Didn't notice it when I bought the boat this year since it was under the wiring harness. Man do I feel like an idiot.

Had my local shop take a look at it yesterday. They are going to attempt to repair early in the spring. Pull the engine, pull transom assembly, cut out the fibreglass on the inside and just hope its only the inner most piece of wood that's been affected.
0 · Share on TwitterShare on Facebook
«123»