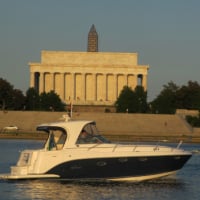 LaRea Alexandria VirginiaMember Posts: 7,052 ✭✭✭✭✭
June 2017 edited June 2017 in Rinker Custom Projects
Over the past couple years, I have upgraded my 2007 Rinker 370 to a fully digital dash with autopilot, engine monitor, broadband radar, two radios and other goodies.  For people considering similar projects, this detailed post might provide some ideas.  I'm pretty sure some readers will think "this guy has completely lost his mind!" 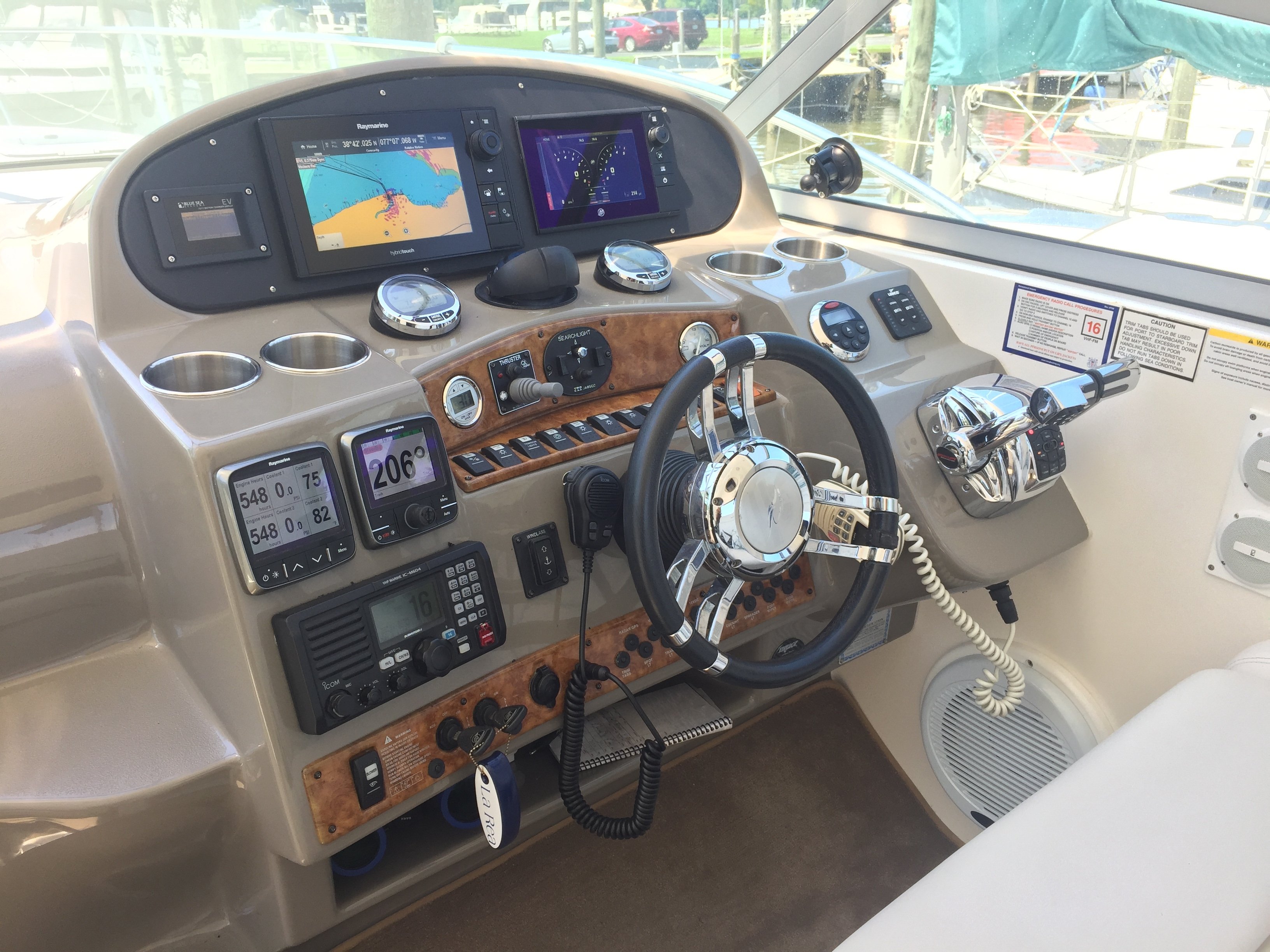 First off, why upgrade?  Well, I am a confirmed gadget freak who loves customizing his boat.  I don't need much of a reason, but I had several.  I was never happy with the 2-kW radar, which struggled to pick up small targets such as crab pot markers.  An autopilot is a must-have for me, as I've said many times on this forum.  Also, I wanted a modern engine management system for "situational awareness" at a deeper level than the analog gauges could provide.
So: autopilot, radar, and an aircraft-grade digital dash.  Easy, right?  Actually, this was a major undertaking.  I think I spent two years dreaming and planning.  After finishing half of it, I took a long break to spread out the costs over a couple years.  And now, finally, here we are!
I'll start with the upper panel, which has a Raymarine es97 chartplotter and a VesselView 702 engine monitor.  Both have touchscreen plus buttons, because I want buttons for when I'm cruising in bumpy water.  All of the analog gauges are gone, gone, gone. 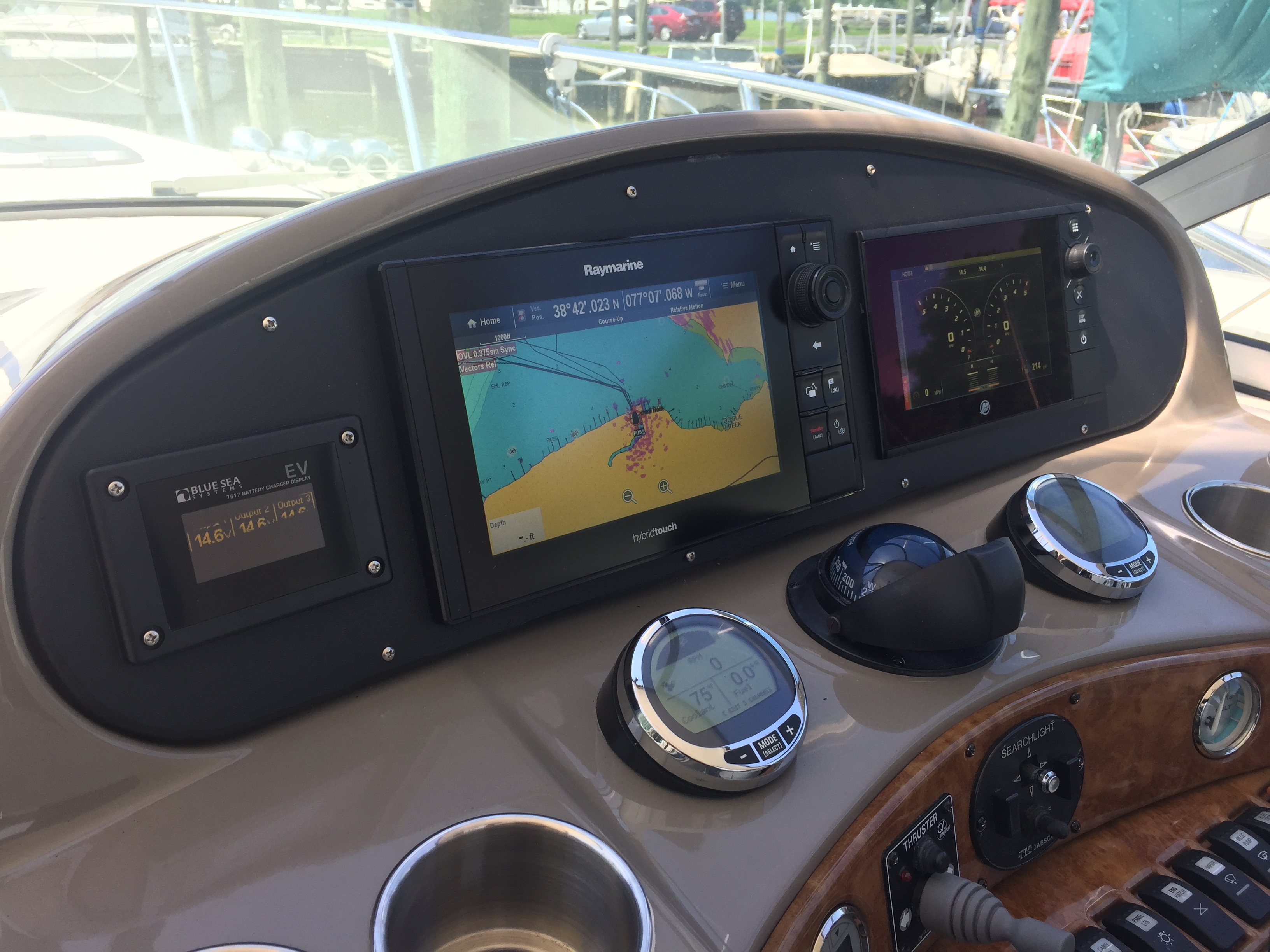 To the left of the chartplotter is a Blue Sea Systems battery monitor.  I installed new TPPL house batteries, a new battery charger, and the battery monitor.  The monitor shows the status of the house bank and both starters.  You can read details about that project here:
http://rinkerboats.vanillaforums.com/discussion/7291/new-ttpl-batteries-plus-blue-sea-systems-charger-and-battery-monitor 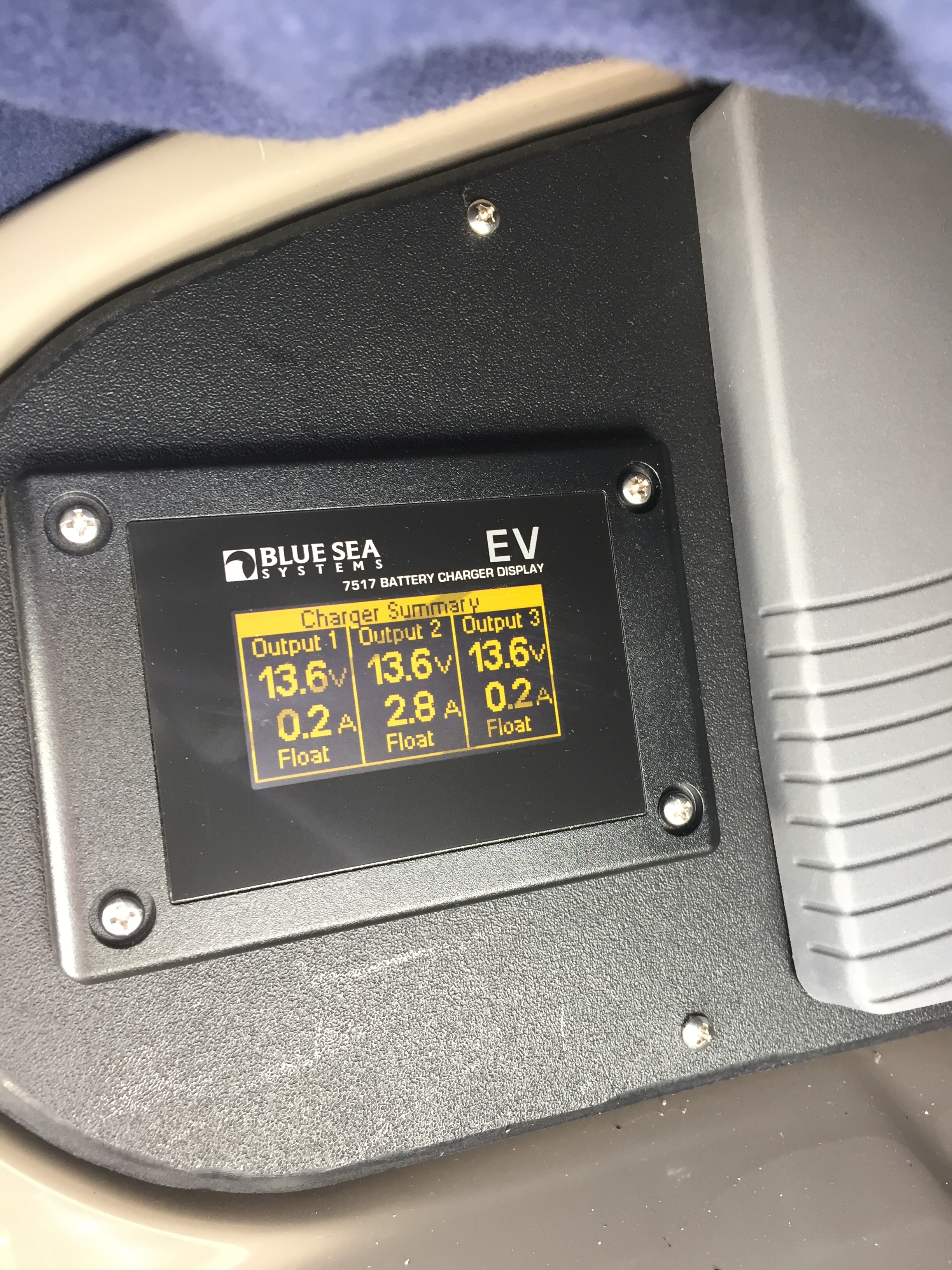 Obviously, I wasn't able to re-use the original plastic woodgrain helm panel.  I bought a piece of 1/2"-thick Starboard marine lumber, screwed the old panel to the Starboard, and used it as a template to mark the outline with a scribe.  I did a rough cut-to-size using a power jigsaw, and used a straight bit on a router to hand-trim the excess.  After sanding the edges smooth with 80-grit paper on a random orbital sander, I rounded the edges with a 1/4" roundoff bit on the router.  Working with Starboard is super-easy.
Just in front of the main panel, I have two MercMonitor engine monitors that were there when I bought the boat.  They are SmartCraft engine monitors that can show most of the same data as the VesselView.  They are primitive by comparison, but I kept them for redundancy.
The lower panel has the original depth gauge, the bow thruster control, the searchlight control, and a voltage gauge showing voltage at the helm.  The thruster control and searchlight control were originally in the left panel, but I relocated them when I installed the autopilot.  I had to reinforce the plastic panel with a backing plate of 1/4" Starboard before drilling the new openings. 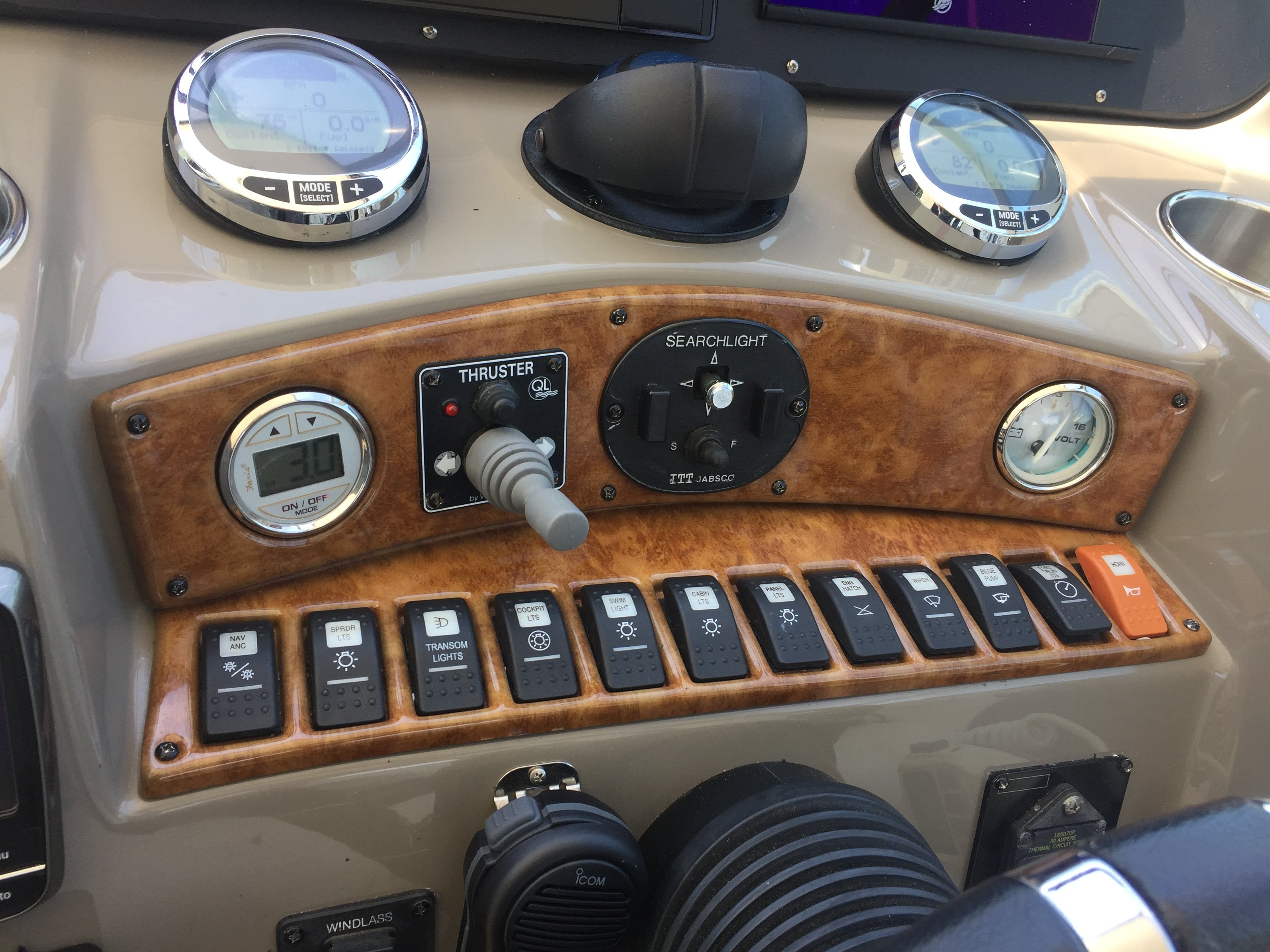 In the left panel, I have an i70 data display, an r70 autopilot controller and an iCOM M604A VHF radio.  I use the i70 to display data such as depth, sea temperature and (coming soon) generator data.

I chose the M604A VHF because I wanted a keypad so it's easy to switch to a working channel.  The M604A is one of the best radios out there, and the sound quality is fantastic.  I wanted it positioned at the left so it's easy to reach when I'm not seated at the helm.  The radio has a mic connector on the front, but because it's next to the stairs, I relocated the mic cable next to the steering wheel where it's less vulnerable to damage. 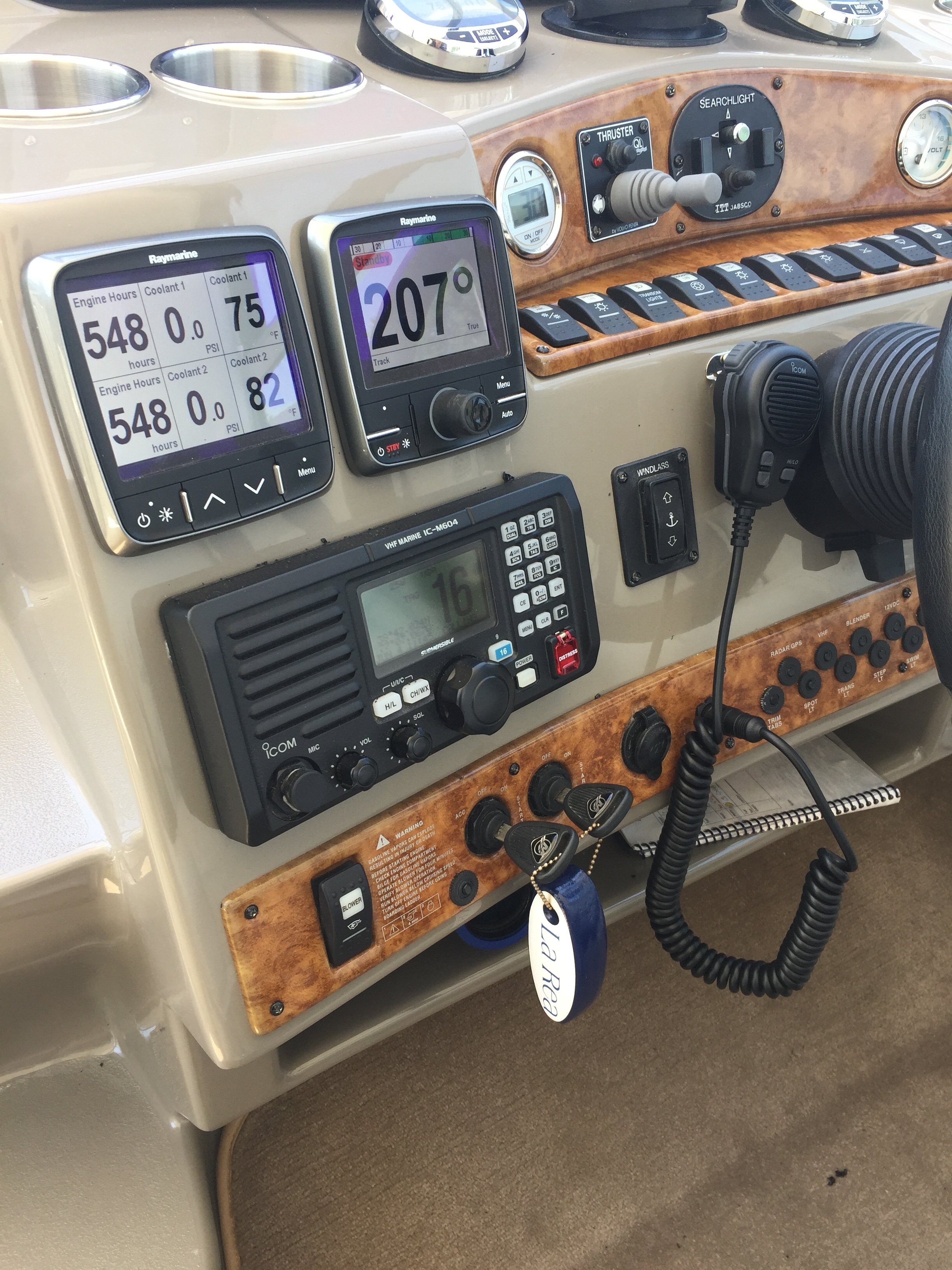 I kept the original VHF, so I have two independent VHF radios that each have their own antenna and GPS.  Both have always-on power for the radio and GPS, so in an emergency, there's no guesswork and no waiting for the GPS to boot up.  I also mounted two small external speakers for the two radios.  Redundancy is a good thing. 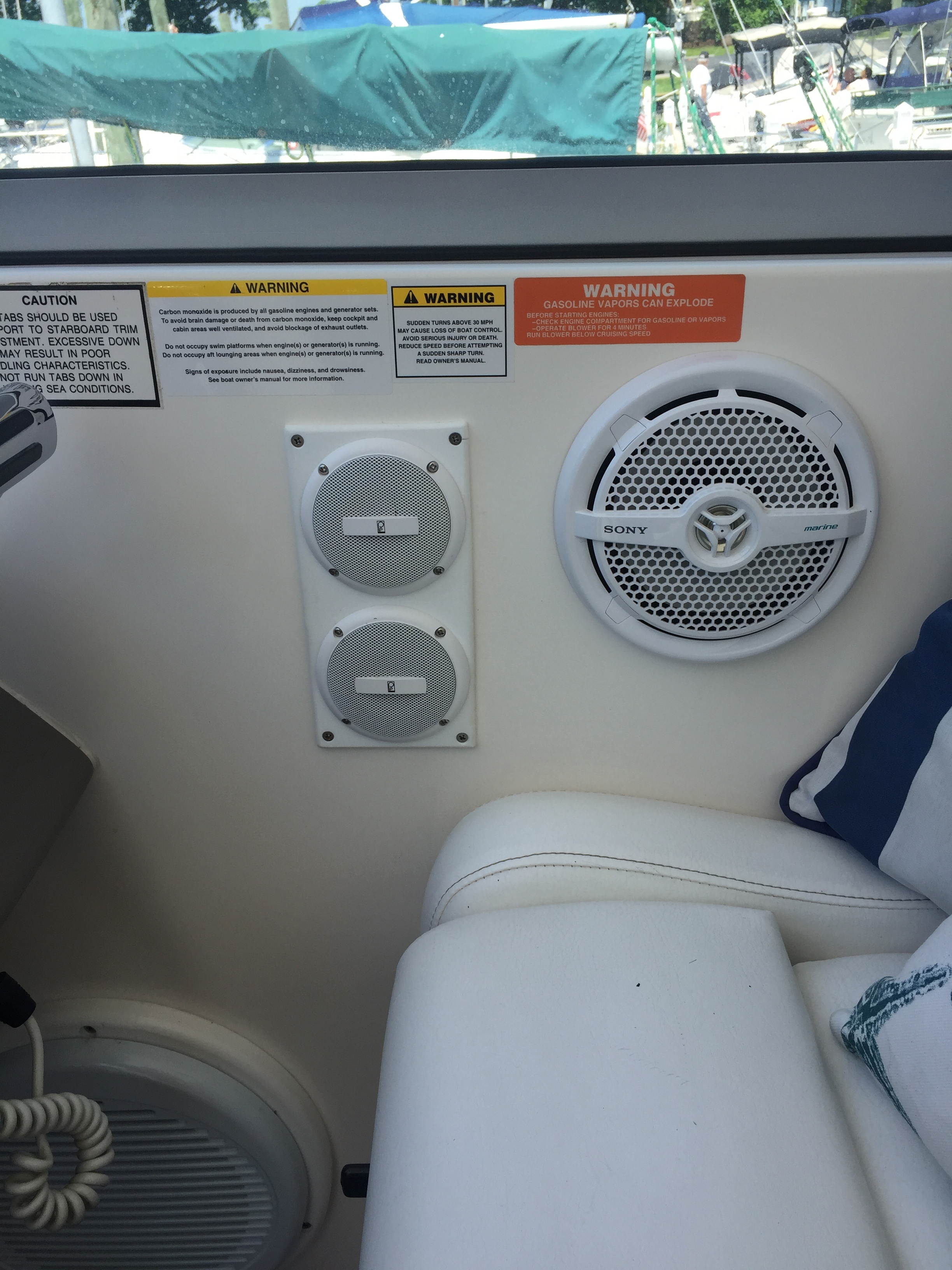 Up on the hardtop, I have the radar, two VHF antennas, two GPS receivers for the radios, and a hailer.  The radar is a Raymarine Quantum 24C, which is their relatively new broadband (chirp) radar.  I opted for that rather than a conventional pulsed radar because it's better for seeing small, close targets.  (I often cruise at night, and I need to see crab pots and small markers.)  I don't have a lot of stick time with it yet, but it seems to perform well. 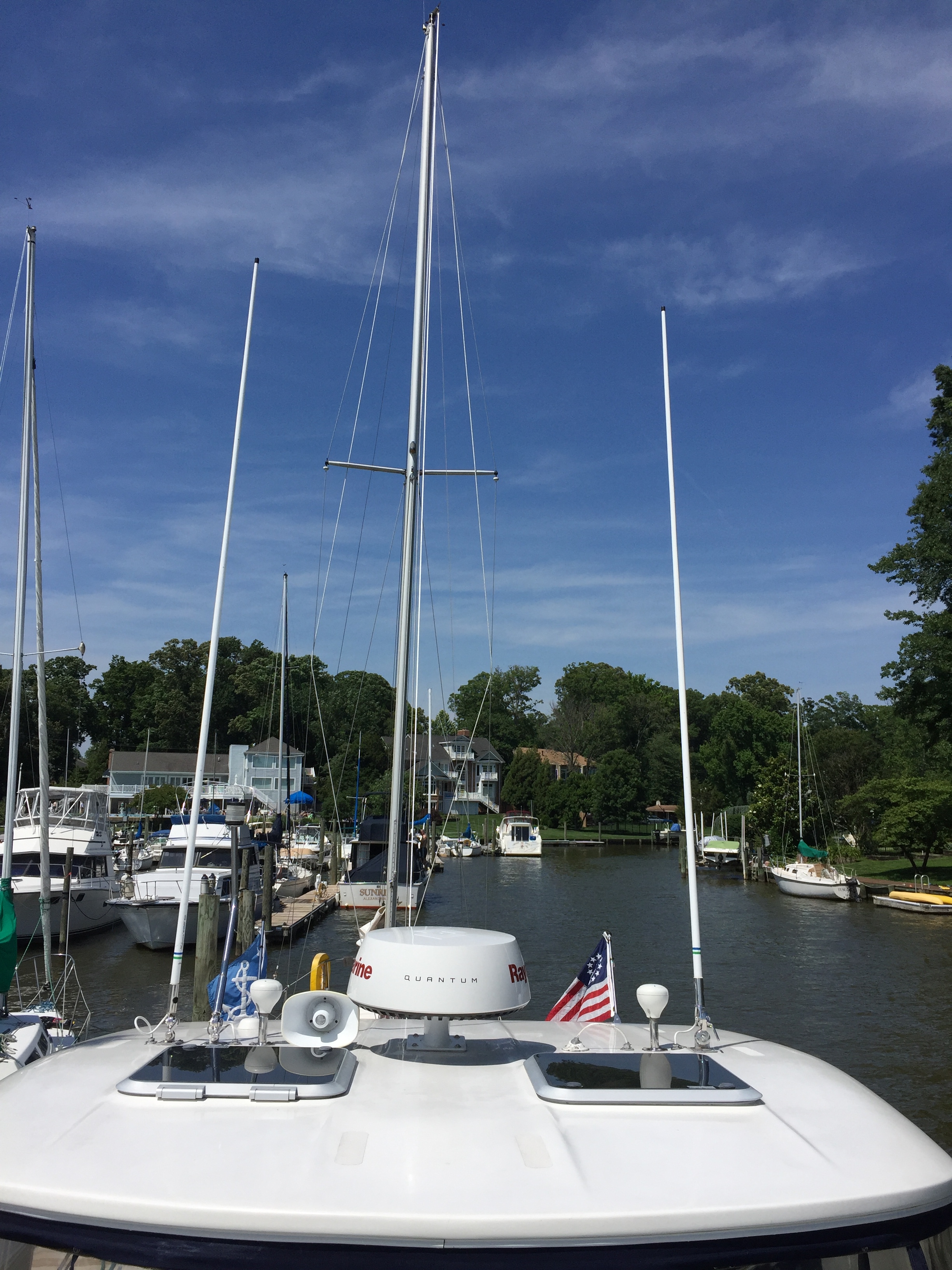 Behind the scenes is the Raymarine Evo autopilot with ACU-200 control unit, EV1 heading sensor, M81105 rudder sensor and Octopus linear drive.  This was the first component I installed a year and a half ago, and it has been absolutely wonderful.  Details on that project can be found in a previous post:
http://rinkerboats.vanillaforums.com/discussion/6500/autopilot-installation-on-370 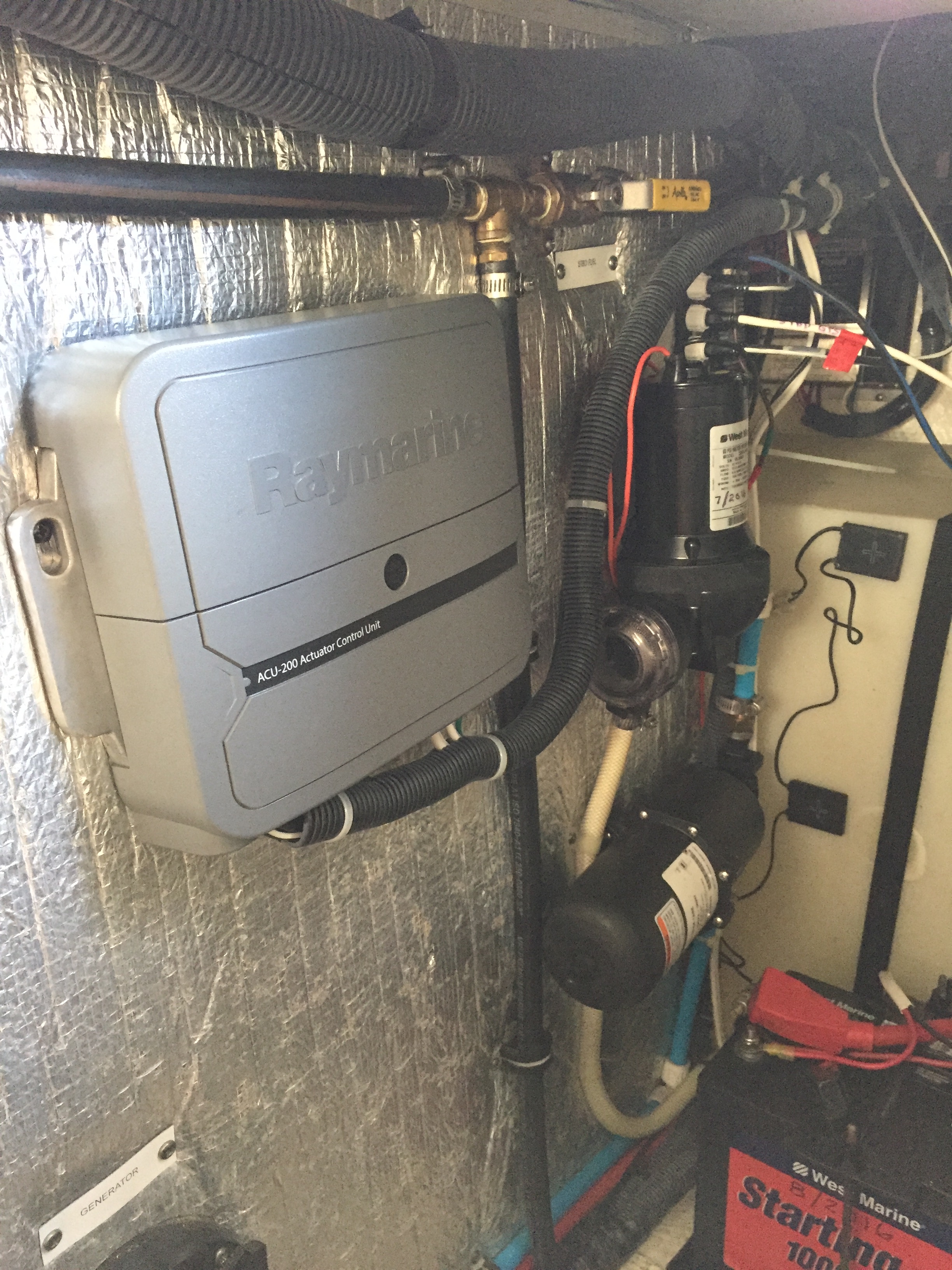 To go all-digital, I needed to bring fuel tank levels into the system.  This change was easy on my Merc 496 engines.  On each engine, I installed a Mercury 84-859743T03 fuel/paddle wheel harness ($60 per engine).  It connects to a plug on top of the engine, and has a wire that runs to the fuel tank.  All I had to do was cut the original wire from the sender and connect the new wire.  The harness includes a wire for a second tank, so I'm planning to add level sensors for fresh water and the holding tank.  (Note - some engines use the 84-864218 harness, which has a 3-pin connector instead of the 6-pin connector.)
I also needed digital outdrive trim.  To do that required replacing the senders with digital versions.  It's an out-of-the-water job.  The Merc part number is 8M0095310 ($100 per engine).
That pretty much sums it up!
Post edited by LaRea on June 2017
6 · Share on TwitterShare on Facebook
«123»